Posted at 15:07h in Hunting by montanagrant

No single wildlife species has been studied more than the Whitetail Deer! Today’s modern big game critter was once a fanged, small antlered, rabbit sized mammal. After centuries of evolution, adaptation, and change, we still enjoy this wonderful and specialized creature today.

Deer ancestors can be traced back to almost 60 million years ago. These even toed ungulates were called Artiodactyla. The third and fourth toes supported these lean critters weight. Many of these ancient critters were the size of rabbits. Palaeodonta, Ruminantia, Pecora, led to the order known as Cervidae. These names are related to the unique evolution or teeth, stomachs, cranial appendages, and ultimately the antlered, browsing, two toed, long legged, white tailed critter that we all enjoy today.

The modern whitetail deer boasts dozens of sub- species. Each has special characteristics required to survive in a variety of environments. 4 Million years ago, a relative of the whitetail deer managed to migrate from the Arctic Circle and across the ice/land bridge of the Bering Sea. Native peoples, that depended on these animals for fur, food, weapons, and tools, soon followed.

Deer populations have always changed due to predation, weather, habitat change, and disease. The first man caused population decline happened in the 1700’s when fur markets demanded hides for leather. Indians were estimated to have killed 5 million deer a year to feed this market. In the early 1800’s the market demand changed, and deer populations quickly rebounded.

Market hunting for meat became an issue later in the 1800’s. More modern weapons enabled the near elimination of the whitetail deer. The toll caused the decline of deer to be around half a million individuals. Some areas such as Maryland, and parts of Pennsylvania were virtually devoid of deer.

In 1900, the Lacy Act was passed. This was the first American wildlife law. The legislation was motivated by hunters. Now the interstate trafficking of many kinds of sporting wildlife were prohibited.  By 1908, 41 states created Departments of Conservation to manage and protect, wildlife and habitat.

The Great Depression was a whitetail deer boom. Abandoned homes and farms created perfect deer habitat. It was discovered that deer were “Edge” animals. Perimeters of forests, watersheds, and fields were ideal habitat for whitetails.

In the 1950’s netting and darting techniques were developed to capture and transport deer to new areas. Maryland brought deer into the state from many places. Michigan’s Upper Peninsula deer and Canadian whitetails were introduced into the state. Sika deer from Japan were also introduced to the eastern shores of the state. Pennsylvania also brought in many deer candidates for stocking purposes. Some sub species thrived, and others did not.

By 1970 deer populations were on the rise. Hunting licenses soared. Deer camps were now a common place where hunters gathered each fall to celebrate the traditions of hunting. After WW2, the children of the vets became the Baby Boomers. They also became the big game army of hunters. Legislation such as the Pittman Robinson Act leveled a tax on all gear, ammo, and weapons used for hunting. These funds were redistributed to each state based upon hunting licenses sales. Deer populations have exploded since.

We now have pockets of high deer population zones. Limited or no hunting areas have allowed huge deer populations to explode. The result is damage to shrubbery, crops, forests, orchards, and car collisions. Insurance companies have become advocates of high deer limits to reduce populations. Snipers eliminate hundreds of deer over bait piles. Hunters are now allowed to bait for deer to allow for more harvest, in some areas. Fewer qualified hunters are available for regulated hunts. 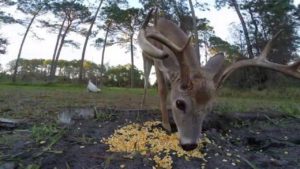 As the deer population continues to grow, something must give. Habitat can only carry so many deer. Disease or other population issues will arise. CWD, and other deer diseases are more easily spread from nose to nose contact at bait piles or with other infected animals. Deer ticks that carry Lyme’s disease and a range of other bacterial illnesses are spread more quickly.

Today, “Odocoileus Virginianus” is the most abundant and common deer in the world.  There are 30 subspecies in North and Central America. 8 additional subspecies can be found in South America. The current population of whitetail deer is estimated at 20-25 million individuals. They are the most popular animal chased by hunters.

The future of the Whitetail is going to change. As our human population grows, habitat is destroyed, and deer encounters will become more common. Hunting is only allowed for a few months annually and fewer hunters are available. With fewer hunters, less funds are available for research and protection of our open spaces. Diseases that affect deer, livestock, and human populations will become a bigger issue.

There are no easy answers. Today we can enjoy this amazing animal. That could quickly change. I recall an old Montana farmer telling me how he once saw a set of deer tracks on his huge ranch, in the 40’s. He followed the tracks for 2 days until he finally caught up to it and shot it. The town was so excited to see a deer! Many town folks had never seen one before.

Deer are survivors. They have been around for millions of years. Thanks to evolution, change, and people that care, our wild populations will continue to flourish. With a decline in hunters and hunting, a new revenue stream and army of supporters will need to be found. Hunting is a blood sport and not as popular as it once was. Anti-hunters love this story but do little to raise funds to protect wildlife and wild places. That job has been carried out for generations by hunters.

Hunt while you can, mentor a new hunter, help carry the torch of wildlife management into the future.

For more Montana Grant, visit is blog at www.montanagrantfishing.com.